Skip to the content
We’ve been driving around parts of Panama City the past week and a half during our off time, mostly around Albrook and Balboa areas.  It’s been weird knowing that I’ve been here before, but not really the same areas.

Until this past Saturday. 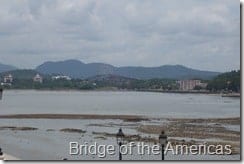 See, this is the first country, really the first city, I’ve been to as a civilian that I once spent time in while I was in the Navy.  I knew some of the area was familiar, but in that general “yeah, this seems familiar” kind of way.  Driving through a part of Balboa, it hit me:  I’ve been THERE before.  I recognized the little shopping area where I bought a hummingbird carved from a nut, and where I bought a painting that still hangs on our wall at home.  I even drove by (a couple of times now) the McDonalds that we all ate at, and that I ordered an “hamburgesa sin carne” (hamburger without meat, for a vegetarian friend).  I’m going to see the Panama Canal this coming Saturday as a tourist.  The last time I saw it, I was in the middle of it on “el barco blanco” – the USNS Stalwart (T-AGOS 1).

I am a changed man since I was here last, so my feelings aren’t coming back like I want to re-live those days, but man, it’s a strange feeling some time.  I’m glad I can remember some of the past and see the difference in my life now, and sometimes I’m glad that I don’t have memories of other things.  But the truth is, I have more than enough, and don’t always want the ones I have.

The main point is, this to me is proof that you can begin again.  I’m in the same place physically, but a totally different place spiritually.  I can have good memories and not get caught up in bad ones.  I can be thankful that I’ve had the opportunity to travel all over the world, serving my country in one life, and serving God in another.

Wonder what’ll come up next?  I’m excited to find out myself.

One reply on “Deja Vu All Over Again”

Dexter!!!! Wow, here I am on deployment thinking back on the “good old days” and I find this article! I hope things have been well for you! It has been too long sing you were an OS2 and I was an IT2! Hit me up sometime!